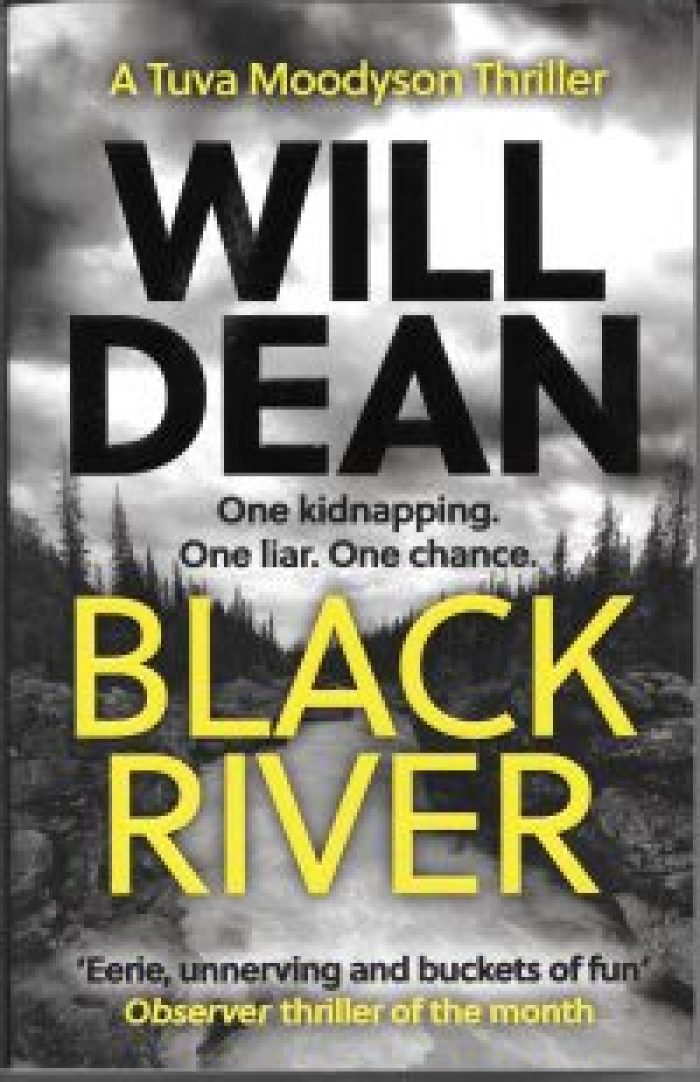 A BOOK with a cover claiming the contents are “eerie, unnerving and buckets of fun” presents a puzzle before a single page is turned.

Unnerving and fun? Such an odd mix. Especially for what is also billed as “a thriller”, and involves “one kidnapping, one liar, one chance”.

Where are “the buckets of fun” going  to be found amid such ingredients? And will they detract from the promised unnerving thrills?

The answer, of course, is to venture forth. To succumb to the lure dangled by the blurbs (“fear, secrets, lies” forewarns the back cover) attached to Black River, the latest crime tale from comparative newcomer Will Dean.

Let yourself be led into what transpires as a weird and threatening world set well apart from the everyday life  many miles away in the rest of the country.

A  community that is riven by factions, mistrust and unbalanced characters. A place that is almost a law unto itself; where the police are more complicit than forceful and outsiders are met with suspicion and swirling undercurrents of danger.

The setting is Gavrik, a small rural township in the north of Sweden. Its mostly dark and looming landscape plays as  dominant a role as any of the numerous diverse and  finely etched characters that constitute its edgy population.

According to local news reporter Tuva Moodyson, it is “the place the world forgot”. A one-horse town surrounded by a one-thousand moose forest. Where the twin chimneys of the licorice factory belch out a sickly aroma and a sub-culture collection of hillbilly-like oddities rides roughshod over rules and regulations.

Having recently escaped several hundred kilometres south for a better job and lifestyle, the newly sober Tuva has driven back through the night in response to an urgent message; Tammy, her closest friend in Gavrik, has disappeared.

Vanished overnight. The food truck that is her livelihood has been broken into but her handbag, cash and car remain.

The local police chief is cautiously helpful but warns against fearing the worst.  It’s early days in a possible missing person case and a simple explanation is more than likely.

There is, of course, no simple explanation. Quite the reverse. Tuva doesn’t wait for the police to do what she feels they should be doing. Thus things go rapidly downhill as she delves into the lives of possible suspects.

She is soon getting up close and confrontational with anyone likely to have had contact with Tammy.

The response is an atmosphere full of menace; which quickly descends into the physical and violent.  Missing person posters Tuva pastes all over town are ripped down. Replaced by appeals for help in finding another young woman who has disappeared.

But that supposed victim is white and locally born; Tammy, although Swedish by birth, is of Thai descent.

Latent racism soon rises to the surface. Plus the simmering air of violence such closed societies tend to show towards those they consider outsiders.

Witchcraft is also in the mix, relying on regional folklore for its power to threaten and control.

The biggest threat and menace, however, is the landscape itself.  Rough terrain, a dark and impenetrable pine forest, the vicious swarms of mosquitoes and the untamed rivers.

Author Dean knows such landscapes well. He paints Gavrik and its surrounds with the knowledge of deep personal experience.

Although born raised and educated in the UK,   he and his family moved a dozen years ago to create their self-built home on a couple of acres in the middle of a Swedish forest. Isolated,  surrounded by miles of trees. No access road, reached along a winding tree-lined dirt road, weather – and moose – permitting.

Shopping is a twice-monthly drive to the one shop in their nearest town, 30 minutes away on a good day; with chainsaw at hand to clear their way around fallen trees.

Water comes from his self-dug 110-metre well, potatoes from the veg patch and wood from trees around their home.

So the landscape that looms so prominently and darkly in Black River is no figment of a lurid imagination. Which makes Dean’s tale all the more readable and gripping.

He knows such a landscape, its flora and fauna, the cabin fever-like madness of the cloying heat of midsommar and the dangers posed by rampant boar and moose.

All of which close in around Tuva with claustrophobic effect as she battles obstructions at every turn; some of them created by her unseen adversaries, others mishaps and accidents born of her own failings and weaknesses.  Not least of which is her profound deafness.

When her hearing aids lose their charge or get damaged or dropped into the muddy forest floor, she is as lost as others who lose coverage or battery charge with their mobile phones.

It is another plus that Dean writes with such understanding and empathy about hearing loss and all it entails.

There will be no spoilers revealing the losses and wins, the disasters and triumphs that Tuva faces along her suspense-laden journey to resolve the mystery of Tammy’s disappearance.

Suffice to say it is a nail-biter. A cliff-edge suspense at each chapter’s end.  With the bonus of an insight into the little known world of the Raggare sub-culture and the off-grid characters on its fringes.

Scandi Noir at its best.