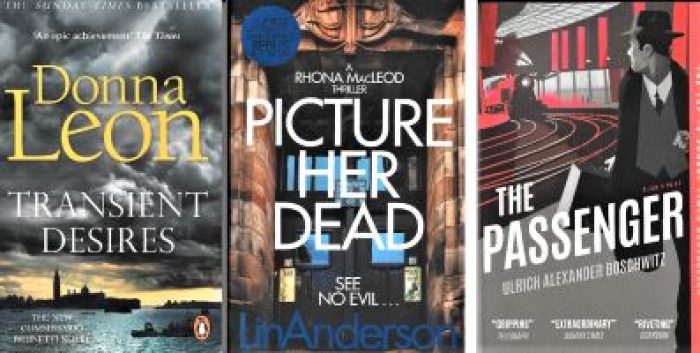 A HYPOTHETICAL: what would make a good Christmas gift for an avid reader of crime fiction?  Faced by a pile of recent reads, I soon realised this was an almost impossible task. Too much choice; too many vying for the top spot. And such a broad range of  preferences among devotees of the genre.

Much easier to choose a selection. A bit of an each way bet, perhaps, and a coward’s way out of making a decision. But slightly less stressful than whittling the pile down to a single choice.

Also covering a wider range of  themes, locations and styles.

So, and as they say on Strictly, “in no particular order” here is a trifecta of crime fiction that has provided reading pleasure in recent months.

There is no common ground of location, character or crime between them. However, each in its own way held my interest and attention from go to whoa.

One is a republished oldie (but a goodie) from a justly popular series that now extends to sixteen titles; another is by a doyenne of the craft and a favourite of millions; and the third is by a new (at least to me) author who wrote only two books before a very young death.

Much of the appeal provided by all three came from the backdrops to the central crimes.  Historical details and settings held the attention almost as much as the twists and turns of the main plots.

Glasgow, a city famed for its cinemas

Who knew, for instance, that Glasgow was once known as Cinema City? Back then it could boast of having more than 130 cinemas. This was more than any other city outside America.

These droplets of trivia are the foundation on which Scottish author Lin Anderson builds the intriguing Picture Her Dead.  It’s one of several thrillers in Anderson’s long-running series featuring dogged forensic scientist Rhona MacLeod.

Glasgow’s derelict picture houses provide a multi-layered and fascinating  background as the likeable Rhona is drawn deeper and deeper into solving the inexplicable disappearance of  art student  Jude Evans.

Jude is compiling a photographic portfolio of the old cinemas. She is also a friend of Liam, a fellow student and Rhona MacLeod’s son. She is last seen exploring the derelict Rosevale Cinema, while on her way to meet Liam.

The cinema’s facade is now the shop window for a charity shop that uses part of the interior as a storeroom, where all is dim, dark and threatening

Unknown to Rhona and Liam, it is here that Jude makes a frightening discovery that sets off a deadly chain of events.

Only when the police tell Liam that Jude’s disappearance is “just another missing person” does Rhona take an interest.

Her life is already complicated by the surprise reappearance of  presumed dead and buried Detective Sergeant Mike McNab, a close colleague and also boyfriend of her loyal assistant, Chrissie.

After being “killed” in a night club shooting, McNab had earlier been accorded a full police “funeral”; then whisked  away and hidden by special operations. His resurrection leaves him free to testify at the trial of  Nikolai Kalinin, the Russian leader of one of the city’s deadliest crime gangs.

But it is a high risk game. Danger looms around every corner.  And rapidly spreads to threaten all who come into contact with McNab, but Rhona and Chrissie most of all.

Missing student Jude is therefore a problem Rhona  could well do without. This leads to son Liam taking matters into his own hands. A very tangled web indeed, worsened by double-crosses, broken loyalties and brutal stop-at-nothing attacks from Kalinin’s gang.

Picture Her Dead takes an early grip and never lets go. Two mysteries running on parallel lines, the tension steadily climbing, the body count rising. And with the history of Glasgow’s cinemas providing a fresh and intriguing background.

IT is tempting to describe Transient Desires by long time personal favourite Donna Leon as excellent bedtime fodder. So gentle and soporific is the writing that sleep is likely to descend within a few pages of reading.

This is the thirtieth tale in Leon’s impressively long series woven around police commissioner Guido Brunetti and his beloved Venice. As ever, the prose is impeccable, and the depiction of the city and its inhabitants is detailed and finely nuanced.

A veritable Baedeker for enquiring travellers.  An incisive guide to all the city’s many facets. Plus a gentle police procedural wending its way through it.

As ever, Brunetti makes an admirably relaxed and laid back guide; no impulsive or sudden actions. Always ready to take a break for a glass of coffee or wine to calm body and mind. Ever mindful of the pecking order and niceties of officialdom.

Gently does it is the Brunetti way. He rarely rushes, strolls home for delectable lunches and devotes as much time to reading the classics as he does to his case files.

Thus we are eased gently into this mystery of  the whys and wherefores of how the badly injured bodies of two young American women come to be dumped on the canal-side deck of the city hospital.

Clearly they are the victims – accidental or deliberate? – of nighttime activity on the dangerous waters that make Venice unique among the world’s cities. Several scenarios are suggested but none can be confirmed.

And, of course, he poses a question or two for the ever resourceful  Signorina Elettra to follow into the netherworld of personal data she forever penetrates with unfailing efficiency. And uttermost secrecy. Plus always impeccably attired, as Brunetti never fails to notice.

Gradually the focus falls on the activities of those who have long held sway along the less public fringes of waterside businesses; the owners and operators of fleets of that ply the lagoon’s waters.  More often carrying cargo rather than tourists; goods that are guarded from closer inspection.

Palms are greased, coercion is applied. Families bear grudges against families through the generations. Fear and reprisals are the weapons of choice with the authorities often reluctant or deliberately slow to act.

It is new territory for Brunetti. Calm diplomacy is needed to deal with the civil guard and the water police; toes are easily trodden upon; feathers ruffled.

Especially when his enquiries centre on one of the waterfront’s major players and their wayward offspring – two lads who take the young women tourists for a nighttime joyride.

The outcome is a thrilling finale with the navy, armed militia and police joining forces to expose a people smuggling racket.  And with Brunetti in the thick of the action.

It is the consistently reliable formula that has delighted Leon’s battalions of fans throughout all previous twenty-nine Brunetti tales. The lead characters rarely alter, the almost languid prose never varies.  And the writing remains as lucid and literate as ever.

But such is the soporific nature of much of Transient Desires one cannot help wondering if it is time for Brunetti to give full rein to his dreams of retirement. To spending more time with a glass or two of pinot grigio or grappa while lost in the writings of Tacitus.

WHILE  trying summarise my thoughts after reading The Passenger by Ulrich Alexander Boschwitz I was afflicted by one of those irritating ear-worms. The persistent playing in my head of a much-loved but long forgotten tune. Uninvited and refusing to be dismissed.

The words of Windmills of Your Mind (by Noel Harrison) would not go away. Nor would the soaring, dipping and diving, ever spiraling music of Michel Legrand.

Words and music perfectly encapsulated the feelings generated by this enthralling story set in pre-war Germany:

Round like a circle in a spiral, like a wheel within a wheel
Never ending or beginning on an ever spinning reel …..

This was what awaits Otto Silbermann (the passenger of the book’s title) when he leaves his Berlin apartment in late November 1938 in what becomes a futile attempt to escape the horrors of the Nazi regime.

Slowly at first but gradually and relentlessly speeding towards the whirlwind of a climax.

Otto is a Jew. One of the many who knew their fate was sealed as soon as Hitler and the National Socialists took control of the country. Already he has suffered heavily when trying to sell his house. He is beaten down to well below market prices simply because he is a Jew.

A further blow falls when his business partner, Gustav Becker, demands more than his due share of  a hurried agreement between them to wind-up the business.

Becker feigns friendship under the guise that they are both Germans. But he is also  a proud member of the party hellbent on eradicating the Jews. His duplicity is  revealed when Otto sees him cosying up to uniformed members of the dreaded SS.

It is, says Becker, how things will be done in future. A friendship that has survived since meeting on the battlefields of the First World War comes to an abrupt end.

Otto  telegrams his wife to meet him in a nearby cafe. When she fails to appear, he hurries home  only to find soldiers running rampant through his apartment block and no sign of his wife.

He becomes a desperate man on the run. All he has is a briefcase stuffed with cash from his deal with Becker. And the faint saving grace of an appearance that bears few immediately obvious Jewish characteristics. At least for now he can gain access to cafes and hotels.

But where to go?

Earlier plans for him and his wife to join their son in Paris have come to nothing; the uncaring son has taken too long to secure an exit visa.

Neighbouring countries might be a temporary solution but the borders are closing.

And so begins a nightmare train journey. Keeping on the move, but with somewhere to sleep.

Early on he tries to relax, read a book. But soon becomes unsettled by the presence of others. Suspicious of their reasons for travelling, fearful of their allegiances, detecting threats in their conversations.

He is forever on edge. Fraught with fear, imagining the worst. The slightest thing unbalances him.

His initial journey gets him to the Belgium border; at first by train, then  in a borrowed car driven by a man desperate to make some fast money. The final stage is a nighttime slog on foot through dark forests.

Belgian border guards turn him back, refuse his offer of money. Again he resorts to rail travel, buying tickets at random, taking the first train that comes.

His itinerary becomes more and more haphazard, his mind an increasing whirl of suspicion and fear with each contact with fellow passengers.

He dumps his luggage, all belongings now gone. He is robbed of his briefcase, containing all his money. His few remaining contacts shun him. All except his lawyer, a meeting that he knows will have inevitable consequences.

And so it goes,

Round like a circle in a spiral, like a wheel within a wheel
Never ending or beginning on an ever spinning reel …..

And for readers, a gripping and vivid tale set in a period of history that should never be forgotten.

** Boschwitz, who settled in England in 1939 and was interned as an enemy alien, wrote only two books. He was shipped to Australia and later allowed to return.  His ship was sunk by a German submarine. He was among the 362 passengers who perished, aged 27.