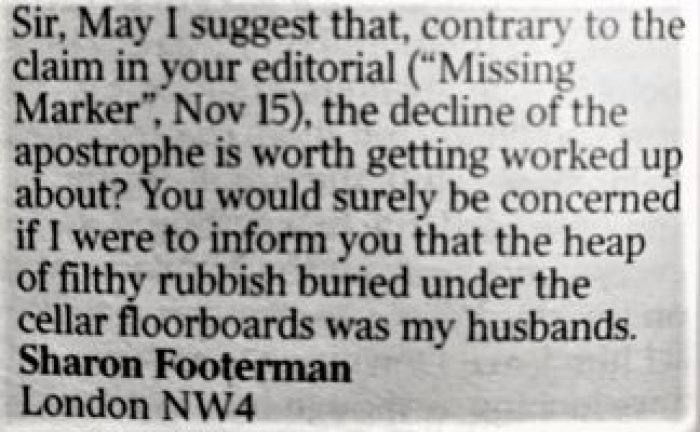 Lets eat Grandma and to hell with punctuation

WAR has been declared.  It has long been simmering with spasmodic outbreaks of invective hurled across the Great Grammatical Divide separating the two sides.

But now it is out in the open.

Apostrophe or no apostrophe, that is the question (as the greatest source of precise English would likely have defined it).

It is no longer a matter of fusillades of mud-slinging between grammarians and the anti-punctuation heretics.

It is now a costly matter of law. To be settled in the courts, no less. One more battleground in the widening split between the woke and non-woke.

And all because one of those much maligned apostrophes went walkabout in a Facebook post written by a discontented Australian real estate agent.

Actually somewhat more than going walkabout; how about not even putting in an appearance?

Those well versed in Australia’s rigorous defamation laws estimate its absence could cost the person responsible thousands of dollars in damages.

A New South Wales judge has already ruled sufficient cause exists for a defamation case to proceed; and the court’s verdict on the importance or otherwise of the humble apostrophe will decide how much Facebook poster, Anthony Zadravic,  will have to pay for his “crime”.

It was last year that the disgruntled Zadravic used the very public forum of Facebook to seemingly accuse his former employer, Stuart Gan, of defaulting on  superannuation (retirement fund) payments.

He added,  “Shame on you Stuart!!! 2 yrs and still waiting!!!” Which could suggest it was intended as a personal complaint arising from alleged non-payments that he felt were his due.

Gan was quick to respond with a claim for defamation.

And as Judge Judith Gibson later ruled, the lack of an apostrophe on the word “employees” could be read to suggest a “systematic pattern of conduct” by Gan’s agency rather than an accusation involving one employee.

So she allowed the case to proceed.

She explained: “The difficulty for the plaintiff is the use of the word employees in the plural. To fail to pay one employee’s superannuation entitlement might be seen as unfortunate; to fail to pay some or all of them looks deliberate.”

Her decision is one in the eye for all who declare punctuation does not matter.

Sorry folks – and that includes a growing number of academics, who should really know better, and who support this negative approach – but it does matter.

It is there for a reason: to make clear the meaning of everything we write.

Such as whether a single employee is missing out on their pension payment or whether it is a company’s entire workforce that is being short-changed.

And, as in the case of this post’s headline, whether grandma is a victim of cannibalistic offspring or merely being urged to hurry up with dinner.

A big difference, especially from grandma’s point of view.

It takes only a brief perusal of posts on Facebook and other such [anti-]social media sites to see the woefully low level to which written English has plummeted.

Little wonder that so many vicious arguments break out, often over what someone may have thought was innocuous but which, thanks to poor spelling and lackadaisical punctuation, has been totally misunderstood.

So much can go wrong through lack of comprehension.  Whether it is at the person to person level when fists might fly or at the nation to nation level where far more deadly weaponry might be called on to settle misunderstandings.

Despite what so many language barbarians are preaching, punctuation, spelling and parsing are essential tools in communication. Misuse them and all hell can break out.

But who cares? Certainly not the academic staff at the University of Hull. They have decided to do away with the requirement for degree candidates to have a working knowledge of English grammar, spelling and punctuation.

How is anyone expected to unravel and understand the theses and dissertations that form the basis of students’ work?

Having in past years endured the challenge posed by editing academic papers I can vouch for their complexity; for how a simple concept can be cloaked deep within a tangled web of poorly constructed phrases, misused and misspelled words and a random sprinkling of commas, semi colons and, of course, apostrophes.

It is not a crime to punctuate. Or to use the correct words. Or to ensure auto correct has not made the wrong assumptions about your vocabulary.

The alternative, as estate agent Anthony Zadravic can testify, could well be an expensive  brush with the law.

A recent (2018) case in the American state of Maine, involving overtime for truck drivers, hinged on the lack of an Oxford comma. It was settled with payment of $5 million in damages. Appeal court judges ruled that the missing comma created enough uncertainty to side with the drivers.

Thus it clearly pays to stick by the rules.

So,  put that apostrophe back where it belongs.

And read through before pressing Send.

“No matter that you have a PhD and have read all of Henry James twice. If you still persist in writing ‘Good food at it’s best’, you deserve to be struck by lightning, hacked up on the spot and buried in an unmarked grave.” –Lynne Truss in her book Eats, Shoots & Leaves