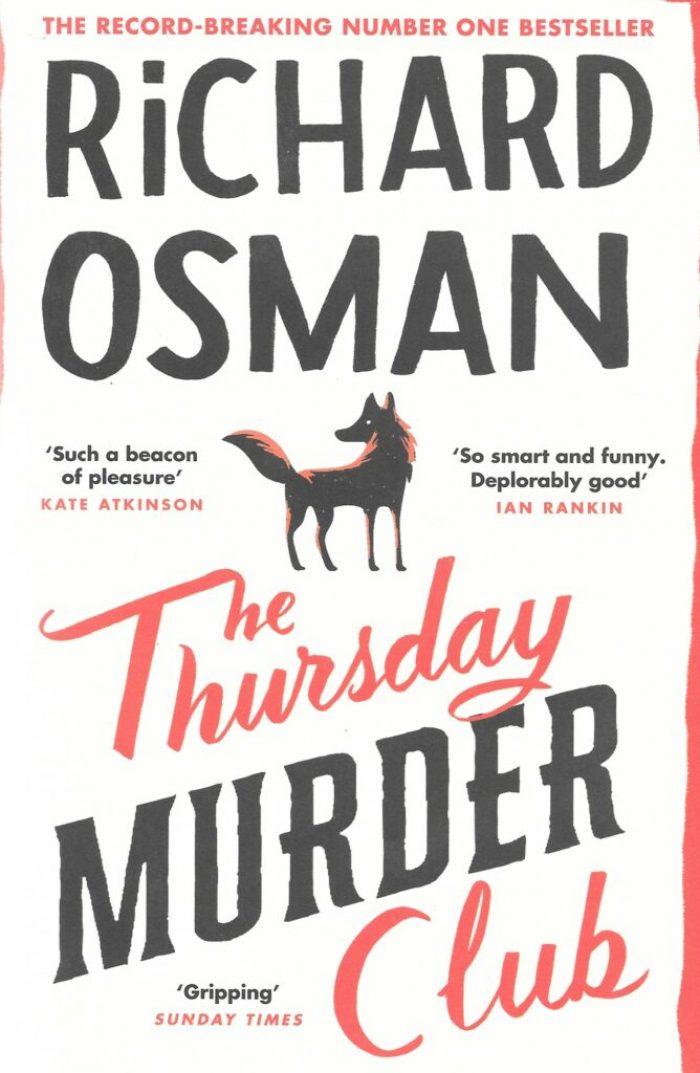 NAH, it can’t be that good. Surely not. Must be because its cover has a celebrity’s name taking top billing as the author.

Another example of vanity publishing, selling by popularity rather than content. Probably ghost written too. Isn’t that how it goes; win the public’s heart through the telly or sport then cash in with a quick book or two?

Lurking behind such doubts is the tidal wave of praise for Richard Osman‘s first venture into crime writing. Such a tsunami  has been impossible to avoid.

And here come a few more; from one now happy to join the throng after an initial bout of sceptism and doubts as expressed above.

The Thursday Murder Club is a zany, madcap ride of a thriller with Osmond continually applying the brakes just as it teeters on the edge of  the farce that it could so easily become.  Rather like enjoying his regular appearances on Pointless, House of Games or the numerous panel shows in which he features. Knowing when to deliver a killer punch,  lift one of those expressive eyebrows, intrude with snappy wordplay or add a sidesplitting one-liner. Impeccable timing. Not a word or gesture wasted. Just like this first venture into long form writing

Death, deceit and sundry other dark deeds neatly balance the levity and the inevitable puns (this is, after all, the work of a master wise-cracker).

The plot twists and turns. So much is never quite as it first seems. Especially the people, so many of them revealing hidden nastiness and evil intent while we had been thinking they would never harm a fly. No dirty deed is beyond them, their lives far removed from their seemingly harmless and saintly existence.

At the forefront of the plot are the four diverse members of the euphemistic title. All are residents at a high-class South Coast  retirement village. All were formerly in careers that explain but do not excuse their ongoing obsession with criminal deeds. Between them they bring to the table many years of close involvement in both sides of the law.

The table where they gather to enjoy “a few glasses of wine and a mystery” is located in the Jigsaw Room, one of numerous facilities catering to the residents’ recreational needs.  As rampant opportunists, they had seized on a vacant two-hour slot to make a group booking, ostensibly for weekly discussions of Japanese opera. A simple ploy as the topic was guaranteed to discourage any uninvited visitors.

Drawing on past experiences, they delve into unsolved crimes; cold cases contained in files that one of the group has gathered from her pre-retirement days in the higher ranks of the police.

Wine, cakes and biscuits add to the pleasure of perusing crime scene pictures,  witness statements and forensic data. Maybe they will stumble across an essential detail the original investigators has overlooked.

Thrilling fun. It helps while away the time before age and ill-health dictate the inevitable transfer from their luxury retirement village; first to the neighbouring nursing home that was once a convent. And from there the journey of no return  to the adjacent convent cemetery.

This neat triumvirate of assets sitting on the several acres of wooded land had been snapped up by  local developer Ian Ventham; a man on the make who sees quick profits in shonky deals and low wages.

And also by sacking his right hand man, Tony Curran,  who had coerced Ventham into handing over a share of the development.

But before Ventham can do the deed, Curran is found in a pool of his own blood. The cause: a collision between his cranium and a  hefty spanner wielded by person or persons unknown.

And so the Thursday Murder Club has a case to solve right on its doorstep. At which point the book assumes the mantle of a damned good murder mystery yet one that doesn’t take itself too seriously.

It provides the four sleuths (and its readers) with numerous clues to solve. There are plenty of  twists and turns, several (mostly) credible surprises and endless succinct and snappy observations on people and life in general.

There have been some sniffy, nose in the air criticisms that it is too lightweight for the serious crime fiction fan; a frippery that they should quickly bypass; not to be taken seriously.

Such comments ignore the fact it is an enjoyable tale that also happens to be well written; and highly enjoyable.

Lighten up, folks. Loosen your stays. Give your laughing gear a workout before it seizes up.

What d’ya want, blood? Well, there’s that too.

Surely in these dark and gloomy times  there can be nothing more welcome than a bloody good laugh. So, welcome to the Thursday Murder Club. Can hardly wait to read your next adventure.

Previous
A vividly evocative tug at the heart-strings
Next
Pot holes and regrets; a road map to dubious freedom