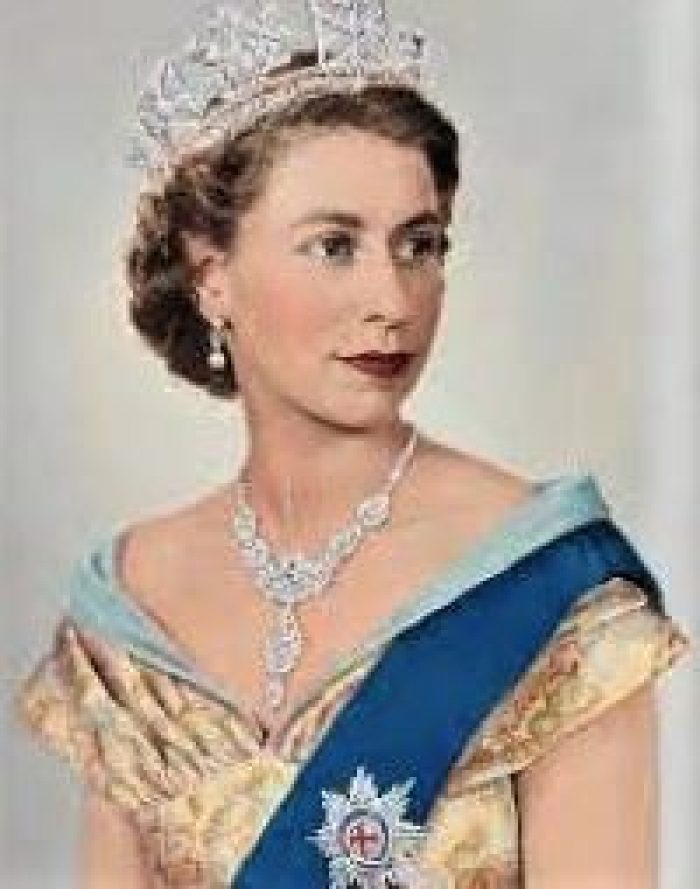 The colourised print based on a 1952 Dorothy Wilding photograph

Minimalist décor the only answer. Forget hanging pictures on your walls. At least one of them, or even a mere detail, is sure to offend someone.

And you never know who or when. They will suddenly take offence, plead harm is being done, or demand reparations for some long ago act or words.

Hardly a day goes by without reports of supposedly damaged persons demanding – they rarely politely ask – immediate action to salve their injured souls.

And so a portrait of the Queen has been taken off the walls of the middle common room at Oxford’s Magdalen College. A committee of students demanded its removal because it represented “an unwelcoming symbol of recent colonial history”.

The decision followed a vote called in the interest of domestic and international students “who might object to the imagery”. Note that word might. No mention of an actual case of being offended or mentally damaged.

And note, too, that the vote was 10 in favour, two against and five abstentions.

The committee’s president, Matthew Katzman, reportedly said it was decided to leave the common room neutral.

Obviously minimalist décor is all the range among Oxford students. That is, until one of them – it only takes one – claims to be offended by the colour of the paintwork.

And Sir John Hayes, chairman of the Common Sense Group of Conservative MPs, commented,  “The sad thing is that you would think that the people of Magdalen College are reasonably bright, and this decision would suggest that they are not.”

Magdalen College president Dinah Rose, QC, said the common room was an organisation of graduate students and “the way they choose to decorate that room is a matter for them.”

“Magdalen believes strongly in freedom of speech, and supports the right of its students to conduct their affairs in accordance with their own democratic processes.”

Ms Rose explained that the image had been bought and hung by a previous crop of students in 2013. It belonged to the college, which had no role in its removal and would not intervene to reverse the decision.

Scary times: As I wrote these words there was a sudden loud and somewhat frightening sound from the next room. A large framed picture of my family in Oz had crashed and smashed to the floor. Right about the time I later learned they and their home were being torn asunder by a huge storm.

BIGGEST RISK IS OF DROWNING IN THEORIES: BBC news recently assured us climate change will be the death of our green and pleasant land.

It will be ravaged the consumed by wildfires. These will be caused by the extreme heat coming our way; temperatures of 30deg will be common.

Odd thing is that not a twig or leaf is harmed in Oz when such “heatwave” conditions occur. It takes 40deg or more to set off the bush fire alerts.

Next night, staying true to its hellfire and brimstone theme, Auntie reported the massive scorched earth threat to the landscape and wildlife is actually caused by the growing use of portable barbecues. Another relatively new phenomenon in an unthinking and uncaring public’s hands.

At least they can be banned from sale; you can’t do that with climate change.  Plus penalise the idiots who abandon them.

The scaremongering BBC then claims life (or at least train travel) will come to a standstill under climate change. Tracks will buckle in the “heatwaves” looming over us.

Yet in the annually scorched Oz outback, trains continue trundling along in 40+ deg heat unslowed by bent rails. Only the passengers tend to wilt on these massively long-haul journeys.

Whatever the truth (something only that  quirky and cranky Californian couple claim to utter), it all comes down to people. You, me, us, them, everyone; no one is exempt or excused.

Meanwhile, the ponderous, portentous voice of David Attenborough informs us “summer brings warmer temperatures”. Really? Who would have thunk that?

To which he adds that jack jumper ants are one of the deadliest creatures in Australia and can kill humans. No doubt the crocs, alligators and sharks will be mightily impressed to hear that.

The jumpers are venomous but their kill rate among humans would give any hitman a fit of the giggles.