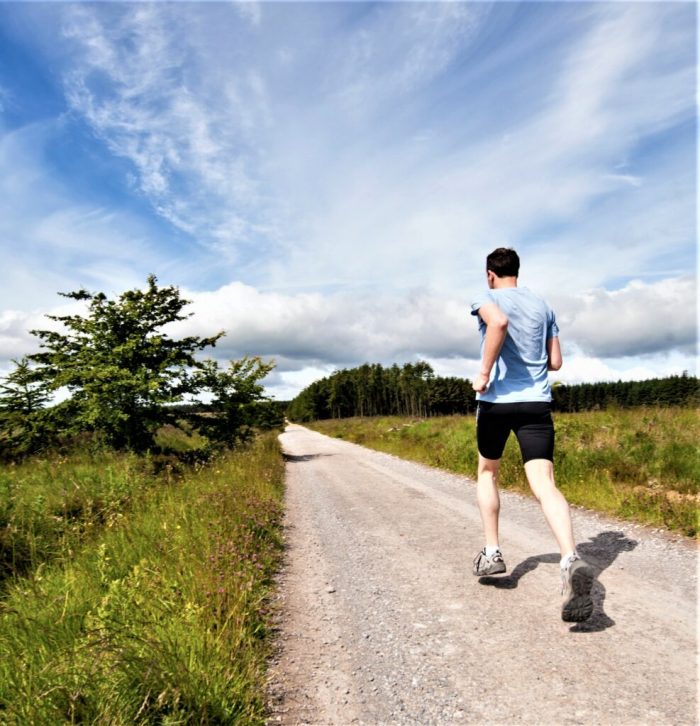 The joy of the open road. Courtesy Jenny Hill (Unsplash)

Since when did running come such a costly activity?

RUNNING is an uncomplicated process of placing one foot ahead of the other; similar to walking but at a faster pace.

No argument with that? Good.

For most people running  is a simple and easy-to-manage forward movement. One that has existed since humankind emerged from our amoebic slime and stood upright.

In addition, for those not fully familiar with this activity, it requires the minimum of special equipment apart from ensuring the runner’s shoes are fit for purpose. That means a good fit, adequate cushioning and soles that are not totally devoid of a usable tread.

Simple. Basic. It is a movement of the legs instantly adaptable to all manner of uses.

As for attire, we all have tops, tees, shorts and slacks well past their respectable use-by date that can be donned without fear of critical comments.

And that is almost all you need to know so far as the majority of people are concerned. Dress for the weather, slip on your shoes and off you go wherever and for how long or how far your mood and condition dictate.

Nothing complicated, and it can be done almost anywhere and at any time. Yet such simplicity has become enmeshed in an almost impenetrable mystique.

The reason running has become so damned complex and expensive can be sheeted home to another group of lockdown opportunists (there are so many of them).  These hot gospellers preach that running is good for you as if this is some newly discovered phenomenon to which only they have the key.

Thus lifestyle magazines, feature pages and social media are awash with their urgings and pronouncements upon this hoary old no-brainer.

True to modern practice, they persist in taking a simple concept and transforming into an arcane activity, its secrets  known only to a blessed few.

In so doing, they deter more than they encourage.  They place more emphasis on the risks and dangers (eh?) than the joys and benefits.

It is right to caution raw beginners about making their legs advance quicker than they are used to, although anyone with a modicum of common sense is guaranteed to notice the warning signs of excessive effort. Signs such as aching calves, stiff joints and short breaths.

This is situation normal and will soon pass is all that need be said about such concerns.

Concentrate instead on the feeling of freedom. Of taking whatever route you please. Of escaping however briefly from the daily routine.  Really feeling the weather be it hot or cold, windy or calm, come rain, hail and snow. Embrace it. Be at one with the elements and to hell with life’s cares and woes. And relish the hot shower and the warming brew that are every runner’s just reward.

And ignore those svelte, impeccably groomed, perfectly toned, ever smiling “influencers”. The world is overflowing with “experts” running lucrative businesses with the sole (no pun intended) purpose of teaching us how to put one foot in front of the other.

Following closely in their wake is a similarly expanding cohort of know-alls touting the innumerable must-have accessories now deemed essential to perform this basic forward movement. Also to be ignored; save your money.

One recent broadsheet article revealed how one should take up running when in their fifties. (A good idea; leave it any later and you are on the fast slide down to decrepitude, stacking on needless weight, and an easy target for all the ills that ensure an earlier than necessary demise).

There was all the usual advice – start gently, ease into it, do some supportive exercising, be wary of using treadmills (bad for the gait) and give priority to good shoes.

All of which come at minimal or zero cost, apart from the shoes.

But then came the add-ons: an hour’s video session with a physio (£50), a gait analysis (also by video), a session with a running coach (for someone just starting out?). The costs keep mounting before you’ve raised a bead of sweat, and this is without the recommended outfit: long-sleeve running top (£85), running shorts (£75), shock-absorbing running insoles (£30).

This is not the end of it.  There is the watch (£259) and the running headphones (£130). What? We’re talking about beginners, encouraging them to get moving and get sweaty, not an Armani fashion parade.

What’s wrong with wearing one’s normal watch when starting out?  And having music or voices drumming into your ears are more of a distraction than an aid, especially in places where you need to hear warnings from traffic, cyclists and other runners.

Also leave the phone at home; going for a run is intended to provide a break from the intrusions and stresses of daily life, not to take your business and domestic pressures and chores with you. And have to fork out for a phone holder (another £30 recommendation).

Follow this expert advice and you will be several hundred quid the poorer with out taking a single step.

The country needs more people of all ages to go running, or at least putting some real effort in to walking and moving. We are leaders in obesity –  not in solving it but increasing it. Which means more and more of us falling victim not only to Covid-19 but to all the many other nasties out there waiting to deal a knockout blow or at least make life unbearable.

Too many are reluctant to get out of their couch potato comfort zone, or cut back on their intake of fats, sugars and general excesses of food and drink.

And portraying the most basic of all activity as a costly pastime does little to help the cause.

Save your hard-earned, folks. Just go for a run or a jog or a fast walk. Whatever. Just do it – and enjoy.

Now, before it’s too late.