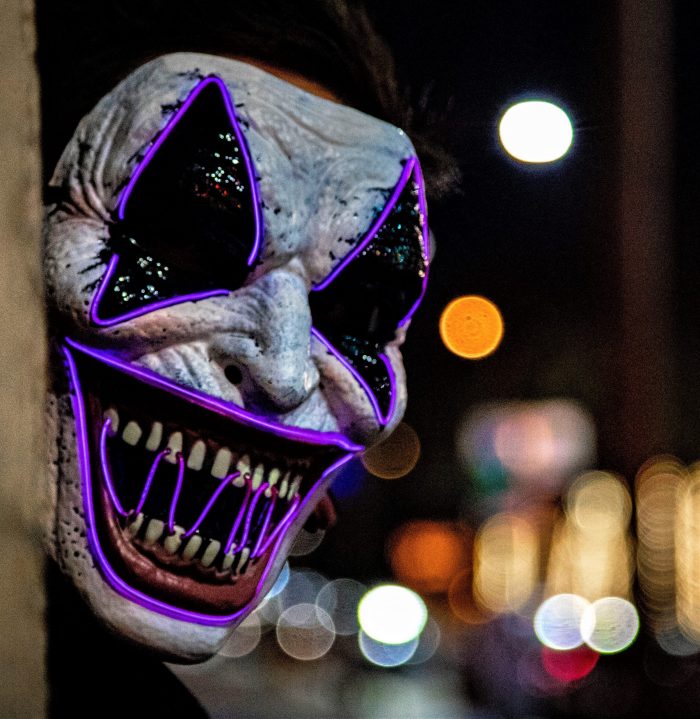 So easy to be spooked in these scary times

BE prepared to be afraid. Very afraid, for these are scary times.

There are frighteners everywhere; and that’s not counting the heavy brigade and their standover mates. Those black-clad steroids on legs, eyes permanently hidden behind Ray Bans.

The grunters and mumblers  who feature so large not only in real life but also in the bloodier ranks of crime fiction, on page and on screen.

Suddenly the scary ones numbers have multiplied.

For this is Halloween, an annual outbreak of madness that brings with it a compulsion for even the most sane and sober to don shredded shrouds and ghoulish make-up.

The uglier the one looks, the better. Feigned disfigurement is the way to go. Slash and bleed. Forget the fake tans; washed out and wan is needed to win ghoulish hearts on the Night of the Dead.

Screams and screeches rend the air.  Leering faces loom in the darkness. Claws and talons seek flesh to be ripped apart.

Of course, it is all good fun (even though it ignores and even connives at the wanton waste of millions of perfectly nutritious pumpkins).

Surprisingly, we seem to have all survived unscathed this blood-curling assault. I say  surprisingly because I feared for all who dared to refer to it as a spooky event. Or mention the presence of spooky sights and a spooky occasion.

There was even brave talk of spooks stalking our streets; of the possibility of young children being spooked. Supermarkets threw caution to the wind and assailed us with incessant promotions for spooky outfits and even spooky food.

And all brazenly occurring within days of media headlines that declared spook and all its derivations was a word not to be uttered or written.

To do so would incur the wrath of that vigilant brigade of righteous souls who unfailingly see evil where no such negative deed was ever intended.

As is their habit, they have delved way back into the past and unearthed one of the several meanings of spook. One that is no longer in use. That is probably vaguely familiar to an aged and minuscule sector of society.

But instead of letting this single and rarely used definition continue its way into oblivion, they highlight it.  Bring it back into the limelight. Chuck their morsel of needless research to the jackals of the media for a surprise feast.

Thus while being alerted to the looming dubious delights of Halloween we are also warned of the greater dangers of committing serious offence by even the merest whisper of spooks. Or of it being spooky. Of kids who are spooked.

These were World War II terms used by a small section of the US armed forces to refer to certain black servicemen.  Not for general usage.

These slurs soon fell into disuse, never to be resurrected. Nor should they be.

To give them oxygen – as was done in recent days – serves no useful purpose. Not to anyone.

All it does is thrust us further back down the dark corridors of conformity. Back into the straitjacket of being afraid to voice an opinion; or saying anything that is contrary to tightly policed strictures imposed by the thought police.

Back to the dark ages of the late 19th century when Oscar Wilde faced court on a charge of homosexuality and Lord Alfred Douglas wrote of “the love that dare not speak its name.”

Culture? What culture? Even Shakespeare is being rewritten for what he penned centuries ago.

And now we have that gloriously outrageous comedian and commentator Billy Connolly admitting he no longer gives public voice for fear that someone may take exception. Or claim they have been offended, even vilified.

A mindless self-serving faceless mob ready to take offence rather than laugh along with Billy, or turn the other cheek.

Guns primed, fingers on their triggers.