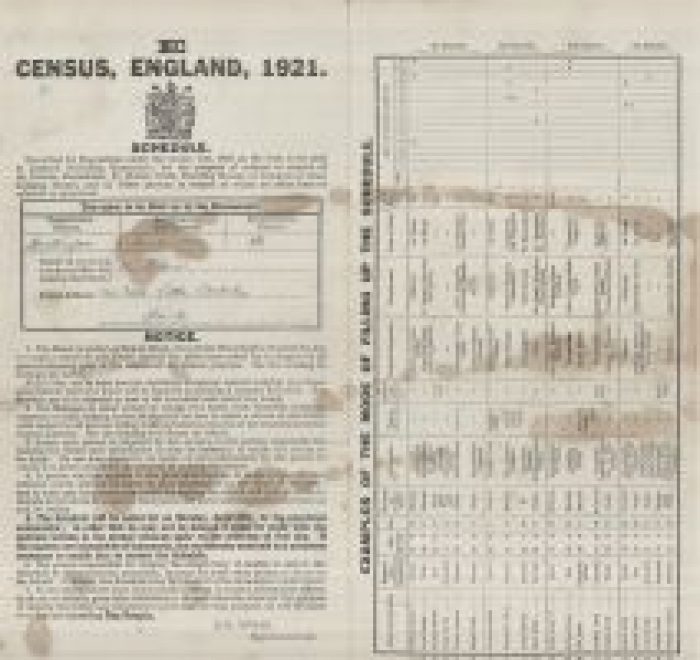 MUCH joy tempered by bouts of shock and sadness. Such is the lot of family historians everywhere. Something I can well attest to after recent foraging in the foliage of my family tree.

Anyone joining this global corps of addicts soon learns that tracking down their ancestors is a long plodding journey. One beset by more highs and lows than ever experienced by the most stubbornly loyal Man United fan.

Exciting moments of discovery, and troughs of gloom when trails lead nowhere.

Now, thanks to the recent long-awaited release of the 1921 Census of England and Wales, the odds of making new finds or knocking down brick walls have greatly increased. Dormant trees can be refreshed, wilting branches can be revived.

This census is the most detailed of all previous such documents. It is the outcome of three years of intensive conservation and digitisation by The National Archives and genealogy website FindMyPast,  supported by the Office for National Statistics.

Its online availability has brought joy to the thousands of amateur historians addicted to seeking hitherto unknown ancestors. Leavened, inevitably, by the handful of nitpickers and whingers always on hand to deride rather than praise.

True, there are shortcomings, obvious errors and some poor transcriptions. Which is hardly surprising considering the extent of this welcome resource. But corrections are being made.

Better by far to welcome its arrival and notify the mistakes than to whinge and run crying foul to the media, social and otherwise.

The 1921 census was taken on 19 June 1921 after being delayed by two months due to industrial unrest. It used more  than 38,000 enumerators to gather the details of more than 38 million people throughout England and Wales.

It covers more than 8.5 million households plus all manner of public and private institutions, from prisons and military bases to public schools and workhouses.

It is far more detailed than all previous published censuses –  gathered every ten years from the first in 1841 through to 1911. People were asked about their age, birthplace, occupation and residence (including the names of other household members and the number of rooms), and their place of work and employer details.

For the first time, “divorced” was included as an option for marital status.

Its significance is enhanced by being the last census release many of today’s researchers will have access to. The 1931 census was destroyed in a fire and the 1941 census  never happened because of  World War II.

Thus it was that I was among the thousands worldwide who pressed the Search button on the FindMyPast website soon after the document went public.

Simply out of curiosity.  Maybe I would discover something, but did it justify all the pre-release hype? What secrets would it reveal?

Based on a brief almost random look, the answers are Yes and Yes.

Accompanied by expressions of “Wow” and “Oh dear.”  An immediate clash of a big surprise and an emotional low.

A check on my maternal grandparents, the Newsomes,  showed they were still at their address in the Medway town of Gillingham. And their ten-year-old daughter, my mother, was there too.

Then came the double-whammy of finding Gramp’s mother, now a widow, also lived with them. And – the killer punch – her first name was given as Rhoda.

Rhoda? Who? What? This name had so far not appeared anywhere in the family tree’s many branches and twigs. And certainly not among direct ancestral links.

Someone had clearly got their wires twisted and had done so over many years of research.

Urgent checking soon revealed that person to be me. At some stage I had stumbled  down the wrong rabbit hole and come back up in another family’s warren.

All those Newsomes I had tracked and loaded into our family tree were not my Newsomes. All those stories of millworkers and miners, brawlers and boozers belonged to someone else. Characters who had enabled me to paint a colourful and vibrant picture of life on the poverty line in the late 19th century.

All gone. Now to be dispatched in an instant as I kept pressing Delete.

A fresh set of names, places, trades, births, marriages and deaths would have to be found to take their place. This time, the correct ones!

Followed by the rewriting of a substantial chunk of my book about the struggles of their slow emergence from  poverty into middle class affluence. Numerous chapters to be binned; replacements to be researched and written.

While recovering from this shock of having to start over, I turned again to Rhoda, my “new” great-grandmother. The legit one.

Within seven years of her appearance in this census, another source had recorded her death, aged 76, in the Medway Poor Law Union workhouse. From senile decay.

Workhouses were sad, lonely and often brutal places. The final communal refuge of the sick, penniless and broken. A far cry from the warmth, food and companionship Rhoda  would have had when living with her son and his family – in a house where I had once also lived.

So what had happened?  What dramas had led to her sudden change of  circumstances? Waves of emotion hit me. Imagined scenarios.

Sadness for a relative I had only just “met” yet to whom I felt closely attached. A blood relative, a direct link through three generations. Such a tragic end with too many unanswered questions.

The sadness remained, nagging away at my thoughts, hard to shake off.  It  was unimaginable that Nan and Gramp had simply abandoned her. Refused or were unable to support her. A woman who had given her family – my family – nine children, of which seven had died.

It took a while to dawn.

Because it seemed so recent, within my own lifetime, I was viewing the situation from a twenty-first century perspective, an era of “our NHS”, modern care homes and hospices and attentive end-of-life services such as Macmillan.

None of which existed in my grandparents’ time. There was no alternative to the workhouse – such a frightful and forbidding name – when someone was beyond being cared for by their own family. Too frail, too ill mentally as well as physically.

Further research showed Rhoda was admitted to the Poor Law Union – another grim label – on 5 October 1928. She died only five days later.

Clearly her committal had been left to the very last moment. My grandparents had been faced with little choice. Still a sad situation but somewhat less depressing than my earlier dark thoughts.

The deep slough of despond slowly became a pool of sadness. A grim reminder, too, of how far we have progressed in such a short time – and how much, despite the shortcomings, we should value what we have.

Next
Bauer’s romp provides giggles amid the gore