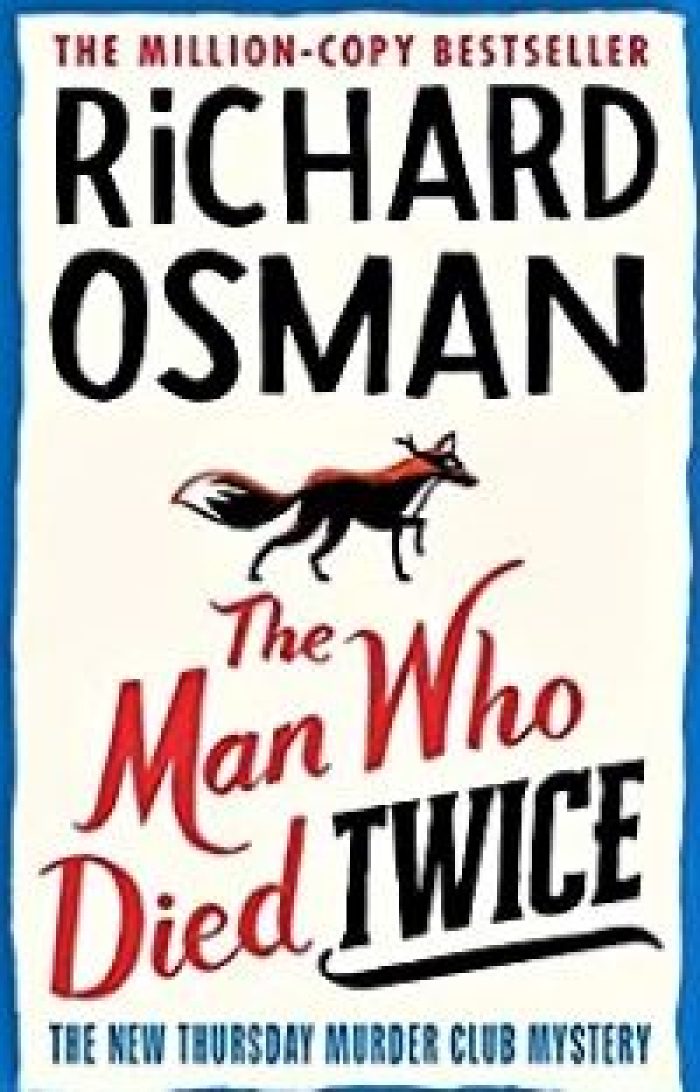 CAN’T help thinking we have reached peak Osman. Urgent action is needed; metaphorically, it is time to paddle for the beach before being engulfed in the succession of tidal boomers  heading our way.

Nowhere will be safe. Hide under a rock if you wish, but that offers no guarantee of escape.

Osmania is sweeping the land. If you think Covid was bad (a bit of blind optimism there), just wait until the full promotional force of the booksellers’ armoury gathers max momentum.

Its guns are fully loaded and primed. Some have already fired their first salvos.

Their ammunition is forged solely from copies of the brand new crime fiction caper,  The Man Who Died Twice.

Or, as Amazon puts it in rare use of bold black caps, The second novel in the record-breaking, million copy bestselling Thursday Murder Club series.

The author, for those already hiding under their rock for other well-founded reasons, is the undoubtedly talented Mr Everybody, Mr Everywhere Richard Osman, of TV quiz show and panel game renown.

Pyramids of his novel fill bookshop windows everywhere. Inside these same stores, precious display space has been found to pile it high on tables and shelves. All else pushed to one side. Secondary. Sidelined.

The publisher’s budget is clearly immense. Which, in a way, is fine. They are backing their horse and putting their money where their mouth is. A commercial decision. Hoping to reap what they sow, many times over.

Which is all very well for Osman as he watches his bank balance soar. But what about the thousands of his fellow authors, many producing books of greater quality and greater merit than his lightweight frippery?

Penury is already the accepted lifestyle of the majority of them, due to some extent to the lack of promotional backing from their publishers. But also to the endless struggle to get even minimal exposure in front of the browsing public.

What wouldn’t they give to have a few copies scattered in a window display or fanned out on a table inside the shop.

It’s like football clubs that lavish millions upon millions on a single star player in what is essentially a team sport. The bigger picture is ignored, often to the detriment of the club and the side as a whole.

And what does this Osmania tell the average bookshop browser and tentative reader other than that here is a book worth reading above all others?

It could be said that anything that  encourages reading is justified effort – a defence we heard from profit-seeking book purveyors when the global Dan Brown phenomenon mowed down all opposition with its lamentable Da Vinci Code in 2003.

But surely there has to be some balance? Crime fiction is a broad church with numerous highly literate works by excellent writers. So many merit attention at least equal to that being lavished on Osman’s books.

His first work, The Thursday Murder Club (reviewed here earlier this year), was definitely entertaining. Plenty of the punning humour and one liners we are used to from Osman the TV performer. A fun read. Good holiday reading.

Now early reviews promise we are in for more of the same with The Man Who Died Twice.

Which should be enough information for fans to decide if they fancy a second dose of geriatric private eyes.

No need for this gross overkill using money that could have benefitted so many other excellent writers while encouraging browsers to broaden their reading lists.

Curiosity might eventually persuade me to buy, but not until the paperback comes out.

Meanwhile orders are in for the new Rankin and forthcoming LeCarre – writers providing all round value for  every penny readers (and publishers) spend on them.