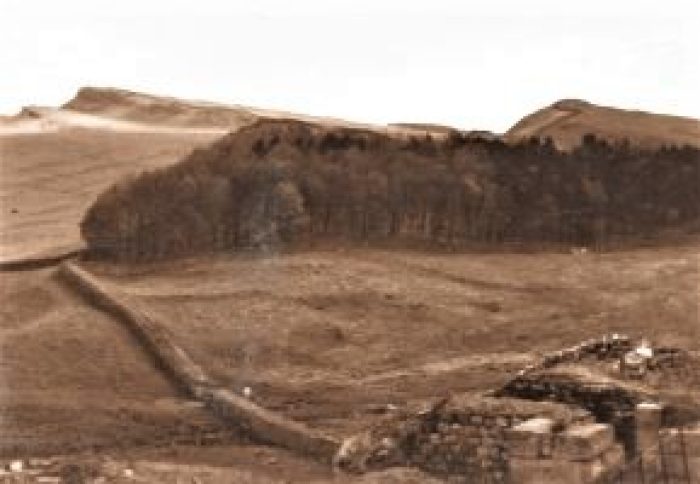 Baffled by Hadrian’s Wall and a mystery postcard

SURELY mine is not the only brain that has gradually turned to mush thanks to this endless lock-down.

I sense previously lively little grey cells have coagulated into something resembling sago pudding.  Thus my head is host to an amorphous  splodge of lifeless nothingness.

A once active organ languishes listless and lifeless. Bogged and befuddled, it refuses to be provoked into action as I return to flicking through my collection of old postcards.

A diversion on an endlessly rainy day made all the more gloomy by seeing the mask free Wimbledon crowd basking in sunshine. The Cornish Riviera holiday haven? Yeah, right; not even Covid microbes would want to linger here.

So, back to the postcards. I cannot help feeling like a conjurer as I instruct myself, “Pick a card, any card.” Although there are no bewildered onlookers prepared to be surprised by what comes to hand.

Instead, with any luck, it will stir up long dormant memories; the halting recall of people, places and incidents buried by the passing years.

So I shuffle the pack and make my random selection. It’s a mystery. The message, if it can be called that, still continues to baffle.

So does the identity of the sender. Unlike most other cards in the pile, this is not one from me to home. I am the recipient, not the sender.

As the address informs, I bear the title of Senior Aircraftsman and am stationed at RAF Abingdon, at that time the training base for members of the Parachute Regiment, or ‘pongos’ as we disdainfully called them.

After all, who in their right mind would volunteer to jump from an aircraft at several thousand feet, armed to the teeth and wearing a pack at least half one’s own weight? A flight to Germany in one of the lumbering Beverleys from which they leapt was as close as I was prepared to go to joining their ranks.

The card’s “message” is a simple drawing of a swastika-like shape, for which I see no reason. Adding to the mystery is a postmark confirming it was sent from South Shields, County Durham, a place with which I have absolutely no connections.

The picture is of a section of Hadrian’s Wall. The camp of Barcovicus, to be precise. Why?

Never visited, not even passed through the area and know no one who has lived there.

Most baffling of all, the sender signs himself as Tony. Who the hell . . .?

Many times I have looked at this puzzling missive. Today it would have come via email or Messenger with a chance of tracking an IP address or trawling elsewhere along the internet trail.

But that’s not to be; it remains a triple whammy of a mystery from a person I know not what of in a place I have never seen.

Oh Tony, wherefore art thou?  It’s still not too late to reveal yourself.