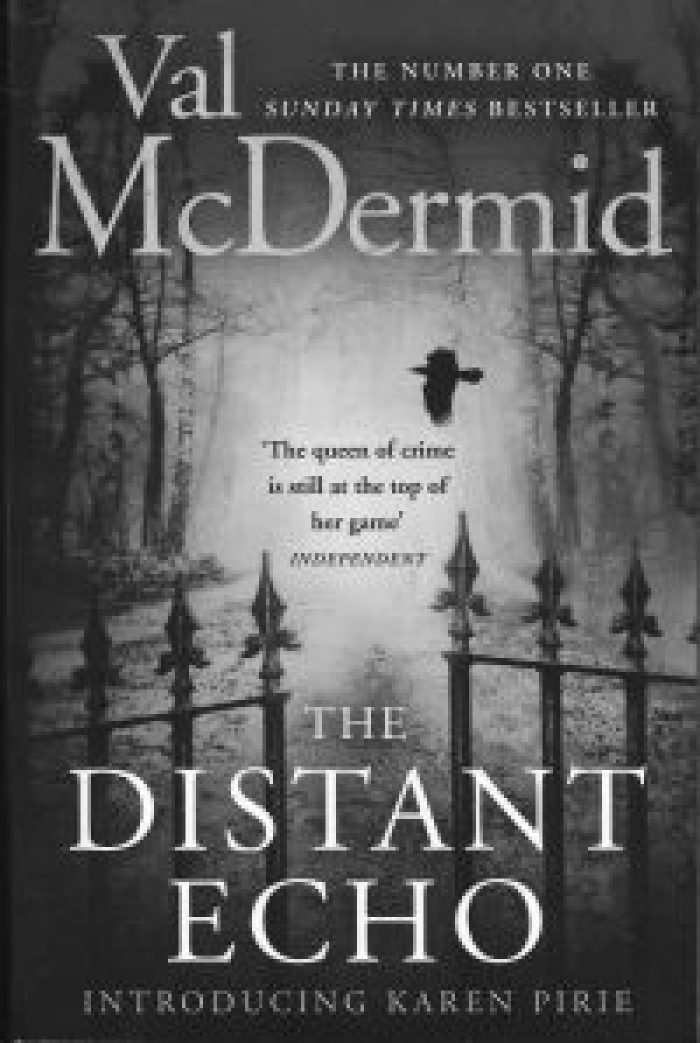 CATCH-up time, trying to reduce the pile of recent reads that have provided a mixed bag of distraction, intrigue, twisting plot-lines and unreliable narrators. Two old favourites and one comparative newbie among a clutch of authors with an unfailing ability to grip and taunt with narratives that leave you guessing to the very end.

The Distant Echo by Val McDermid

FAR from being a new release, this was recently acquired in response to the cover line declaring this thriller was “introducing Karen Pirie”, a name now long familiar to McDermid devotees.

First published in 2003, the tale initially takes us back to well before Karen started learning the ropes as a young detective constable with the Fife constabulary. To a bitterly cold and snowy night in St Andrews and four of the university’s students on a very boozy boys’ night out.

Their raucous carousing comes to a sudden halt when one of them tumbles over  the bleeding body of a young woman. A woman they recognise as Rosie Duff who earlier that night had served them from behind the bar at one of the pubs they had visited.

Their fumbling efforts to save her are stymied by the slow response from the first policeman on the scene and inexplicable delays in the arrival of the ambulance. Her death becomes a murder case with the students as immediate suspects.  A case that is mishandled from the start and is further undermined by the students’ booze and drug addled memories of their night on the town.

Their friendship stays staunchly strong despite being tested by accusations within their quartet and from the wider community. Such evidence as exists goes astray. Leads are not followed up.

Gradually Rosie Duff’s shocking murder ceases to be a high profile case. Police priority is given to other victims. The students move on, establishing careers and families, finding respectability.  Yet never losing touch, watching each other’s backs.

Jump forward twenty-five years and the fears, accusations and suspicions forever looming over them are suddenly made brutally real when one of their number suffer a sudden and brutal death.  Then another meets a similar end.

News of these events filter through to the Fife constabulary where  young constable Karen Pirie is learning the ways and methods of crime detection by delving into dusty old boxes of mostly forgotten cold cases, including the murder of Rosie Duff.

Questions are asked, links are made. But obstacles are thrown in her path. Leads are dismissed as misguided or false. Her superiors are far from encouraging.

Gradually she links past and present. Karen realises someone is out for revenge. She knows the remaining two  suspects in the Rosie Duff case face the fate of their mates.

And so begins a manic pursuit of the vengeful culprit. A twisting, knotty route full of diversions, lies, false trails and detours riddled with accusations and denials going to the very heart of the police.

It is McDermid already in top form yet still climbing towards the pinnacle of crime-writing fame she now rightly occupies.

Good to meet you, DC Pirie.

AND so we move on. By almost twenty years to the most recent of what is now six tales featuring Karen Pirie. A leap in time that has seen her rise to the rank of detective chief inspector in charge of Police Scotland’s Historic Cases Unit.

Although now sharing her bed with crofter and coffee shop owner Hamish Mackenzie, thoughts of former colleague and murdered lover Phil still run deep, never to be fully washed away.

Phil’s killer, Merrick Shand, is about to be released from gaol and Karen is determined to be there to greet him. A plan that is foiled by a well-meaning fellow cop and also the over-protective Hamish.

Despite this anger-making setback, nothing will stop her finding time to hassle Shand and his menacing sidekicks. Not even being plunged into a murky cold case that is suddenly given fresh legs by the discovery of a skeleton in an abandoned campervan.

One vague clue leads to another. And then another. Loose connections  become somewhat tighter.  They lead into the devious world of art and the dealers who control it. And to the equally questionable realm of politicians and their alliances.

Dogged work by Karen and her team plus some fascinating use of forensics sees the trail spread to Ireland and to Europe.  Here author McDermid – always thorough in her research – throws an enlightening beam into the bureaucratic maze of extradition orders which threaten to let a key suspect escape.

The pace rarely slackens, the police pursuers always frustratingly a few steps behind the killers and their accomplices. The trail twists and turns, hits dead ends and becomes ever more life-threatening for Karen and her loyal team.

It’s classic McDermid, every character so credible and well-drawn. Snappy dialogue. Word pictures illuminating Scotland’s diverse landscapes and people. Real people in a real setting. And no let up in the relentless pace of the chase.

Another winner from the mistress of mystery.

Agent Running In The Field by John leCarré

NO introductions needed. No requirement for a biog of author or his genre. Suffice only to say this is another classic by the supreme master of the espionage thriller.

It’s a tale that gives the lie to the claim that the internet and electronic wizardry have made the traditional spy a person of the distant past. Redundant.

No longer, it is claimed, is he/she a gumshoe revealing themselves  to their contacts by discreetly clasping a copy of The Times, or making “drops” in litter bins. No setting appointments by codes fit for Only Connect contestants to solve, or having coincidental meetings in coffee shops or on park benches.

The naysayers insist a spy’s work is now all done “out there” in Internet land with burner phones, texting, tracking devices, chat rooms on the Dark Web. All remote, at a distance, as little personal touch as possible unless a needle has to be plunged in or a knife twisted.

But, as recent events have shown and this book’s title acknowledges, there are still agents “running in the field”.  Defectors are sought and groomed. For their frailties and failings; for their weaknesses and desires.

Once they have been “turned”, whether willingly or by coercion, they continue to go about their humdrum lives. Often content to exist as “sleepers” for as long as their masters demand. Nothing marks them out as spies and traitors. Only their loyalties change.  They operate in plain sight, albeit often bearing names their mothers would never recognise.

As do the leading characters in this absorbing jigsaw of mistaken and misguided loyalties. They move, meet and mingle in and around  London’s genteel and unruffled clubland with decorum and civility while plotting whose back next to stab.

It is here, in the serene surroundings of the Athleticus Club, that Nat, the club’s honorary secretary and long-standing badminton champion, introduces himself as the story’s narrator. Reliable or otherwise, it is for the reader to judge.

Although about to be made redundant after twenty-five years’ loyalty to HM’s Secret Intelligence Service,  he still maintains suspicious caution when lanky newcomer Ed Shannon charms his way into his presence.  His sole purpose, Ed claims, is to challenge Nat on the badminton court.

The drip feed of information, as subtle as ever with leCarre, reveals Ed is not all he pretends to be. Surprise, surprise. But then, neither are most of the precisely drawn characters that swirl around them. Including the enigmatic Nat, who draws on old contacts and travels back to former battlegrounds to stay ahead of the chase.

The plots and counter-plots centre as much on internal rivalries and ambitions as on the threats from without. Civil servants for whom civilities are a mere facade and whose service is primarily devoted to themselves.  Pettiness prevails to mask the deadly pursuits in which they are all engaged.

Duplicity, disloyalty, lies and betrayals – all so subtly and politely enacted – persist to the very end. The veneer of civility rarely wavers. Suspense sustained. The reader mesmerised until the final farewells.

The Girl On The Train by Paula Hawkins

TO review or provide even a brief synopsis of  this bestseller seems close to pointless.

Since its first publication in 2015 it has been publicised, promoted and praised within an inch of its precious life.

It has brought global fame to its author and secured her the inevitable mass following on “social” platforms.

A film version starring Emily Blunt was a box office success in 2016 and others have since followed, including one in  Bollywood style.

It is a tide of approval and popularity against which it would be foolish to struggle.

Suffice to say, therefore, that it didn’t grab me in the way, or to the extent, I was led to believe it would. Disappointed. Let down.

No doubt that there is an intricately woven and teasing plot with more twists, turns and false trails than any maze. And that  characters frequently act in a way you don’t expect them to, yet justifiably and believably so.

The dialogue is strong and mostly convincing.  The writing literate and taut.

But despite all these positives, I didn’t buy it.  It evoked little empathy. The main character and narrator, Rachel, provoked annoyance more than anything else. An irritating voyeur.

Definitely a woman with problems, one who needed help. So why the hell didn’t someone give it to her instead of pussy-footing around her, tolerating her intrusions and tantrums, her accusations and demands?

Excuses and reasons were given but steadily failed to hold water/

Mine is a losing voice in the court of public opinion.  My defence is that I did persevere to the very end. Gave it my all. Invested reading time. But it wasn’t for me.

You win some, you lose some.

Previous
Struggles of streaming is music to my ears
Next
In the long run, even the running has to stop