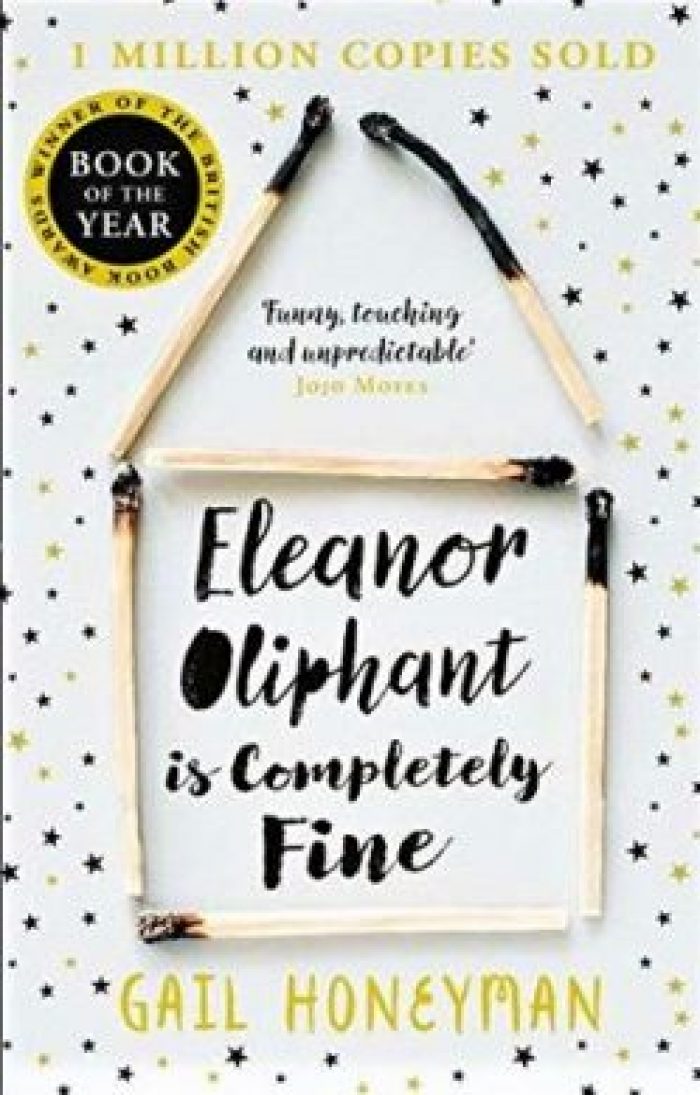 When saying you are ‘fine’ is open to question

A BOOK obtained by an accidental encounter; a volume I had never considered in the several years since it first appeared in 2017 and won the Costa First Novel Award.

Not even as an impulse buy while browsing bookshop shelves.

This intriguing, mesmerising and continually delightful tale was plucked from a box of unwanted items discarded by a neighbour when she was moving out. Lucky me.

Although I did hesitate when glimpsing that inked-in O of the cover illustration; what other markings had been inflicted inside, perhaps obliterating passages of text?

The joke was on me; it transpired as a clever bit of artwork that neatly dovetails with the intensely regimented routine of Eleanor Oliphant’s life as she negotiates her bemused and questioning way through the obstacles it throws at her.

Now almost thirty and on the verge of suicide by vodka and pills, she has not had an easy time of it. But she has survived.

A self-contained entity, as she describes herself: “I don’t need anyone else – there’s no big hole in my life, no missing part of any particular puzzle.” She has always taken great pride in managing her life without outside help. And because has no sense of there being any alternative.

And it’s not been an easy life.  A difficult upbringing would be an understatement. Traumatic at times. Much of it spent in care, shuffled from foster parent to foster parent. Rarely understood or loved.

All of which she appears to have accepted stoically; uncomplaining. Simply her lot in life, good days and bad days, as the book’s alternating sections are headlined.

The opening pages are included in the good days. That’s when she turns up for her first job interview with no work experience, a black eye, a couple of missing teeth and a broken arm.

Clearly Elinor’s idea of what constitutes good and bad is somewhat different from the mainstream’s.

She decides she got the job not, as others might think, because a good Samaritan boss decided to help her but because he saw her as someone he would never have to bother replacing; a person unlikely to seek time off or take breaks for a honeymoon or maternity leave.

Nine years on she is still loyally there as a finance clerk, mostly ignored or tolerated by her colleagues. Seen as a bit of joke, anti-social and a true loner.

She is perpetually bemused by the world around her; accepting explanations mostly without comment while storing them away in her mental warehouse.

A visit to a waxing salon that baffles her by the resulting total nakedness provides immense amusement. As does an equally puzzling session at a nail bar. This she decides is a “distinctly underwhelming” experience at an extortionate price and (spoiler alert) involves an encounter with a half-eaten egg sandwich.

Numerous other collisions with “the real world” provide a steady flow of humour, a neat counter-balance to her hard and brutal early years. Those days slowly come to light through a drip-feed of hints garnered from her asides and responses as she gradually expands and changes her once rigid daily routine.

This slow emergence into the wider world – like the gentle transition from chrysalis to butterfly – gains pace when she and a colleague come to the aid of a heart attack victim who collapses in front of them.

It ramps up further and faster when Elinor becomes besotted by a third rate musician she has seen only on posters and social media. She begins a relentless pursuit; this is to be the man in her life, her long-awaited one and only soulmate.

She has a makeover – clothes, hair, accessories, anything to enhance her appeal to a man who is oblivious to her existence. Who ignores her when she stalks him through Tesco’s, and focuses on the audience beyond her at a gig.

Rejection and hurt follow plus a rapid slide back into earlier alcoholic habits.

Slowly it dawns: Elinor is not some eccentric thirtysomething recluse, not someone to be laughed at or gently pitied for oddly amusing ways.

However, even though she has endured a loveless life of violence and desertion, she is a survivor. She knows no other life, fails to understand how people interact with each other.

Her coping mechanism is always to believe and reiterate she is “fine”.

Which is what she falls back on now that the inescapable cycle of misfortune has returned; even when rushed to hospital, her life in the balance.

Yet, slowly, a change occurs as those around her refuse to be brushed off when trying to help.

She notes how others couple up, studies the ways they look at each other, non-threatening and friendly. Physical contact is accepted, even welcomed; no one is hurt or damaged. Maybe, just maybe, there is something to be learned from these behaviours. To accept rather than reject.

But also for others to recognise that Elinor really is “fine” in her own mind; she simply needs the love, care and comfort she has never received, not to discarded and damaged for being different from what is considered the norm. For being, as we gradually realise though it is never stated, “on the spectrum” – that broad brush classification that disadvantages so many.

Yet always looming in the background is the shadowy Mummy, who dominates Elinor with a 15-minute phone call every Wednesday evening.  A mostly one-sided conversation that “Mummy” uses to denigrate Elinor. Bursts of praise rapidly followed by insults and scorn.

Mummy is an enigma throughout this compelling narrative. She wields an unbreakable influence, a presence Elinor cannot deny or ignore.

Only the persistence of others eventually brings her out from the shadows, along with the dreadful events of the past.

Resolutions that left this reader still wondering if the full truth had finally been  revealed.

But at least Eleanor Oliphant is “fine.”

This one really took me by surprise. Eleanor was a great character and I enjoyed seeing the world through her eyes. I didn't spot the truth about her mother, but then again, I'm not the most observant when reading and rarely figure out the solution to murder mysteries. Anyway, I am glad you got to enjoy Eleanor, even if by complete coincidence.